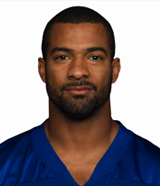 Paysinger came to see Dr. Manger after his aunt had LASIK surgery with Dr. Manger. “She said the facility, the people, the staff – everything was amazing.” His own experience was no disappointment.

“The surgery was no more than 10 minutes or so, there was pretty much no pain at all. It was easy, quick – in and out,” Paysinger said following his procedure. “Right now I’m 20/15, so [it doesn’t] get any better than that.”

Improved vision is a huge convenience for anyone, but particularly beneficial to those in contact sports, such as football. “Having this eye surgery is going to be tremendous for my play,” says Paysinger. “I had instances in college and in the pros where contacts were literally ripped out of my eyes by linemen or people trying to block me, so that was cause enough [to have the procedure] right there.”

Before being signed by the Giants as an undrafted free agent in 2011, Paysinger played college football for the University of Oregon Ducks, where he participated in the 2011 College BCS National Championship Game and was co-recipient of the team’s Todd Doxey Award for “spirituality and dedication.”