As the LASIK expert in Orange County, Dr. Manger is committed to offering patients only the best LASIK eye surgery as part of the LASIKSM experience. A decade in the making, Dr. Manger has 8 lasers in his surgical facility and combines 3 of the most advanced LASIK technologies available when performing the LASIK procedure in Orange County: 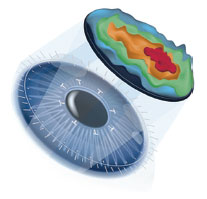 Dr. Manger uses wavefront laser technology before and during your LASIK procedure to accurately and precisely measure the imperfections and irregularities in your eye. The wavefront best LASIK technology in Orange County is 25 times more accurate than the measurements typically taken during an eye exam. This allows Dr. Manger to correct imperfections that could never before be measured or corrected. When wavefront laser technology is used, the LASIK procedure is considered “Custom” or “Custom Wavefront” LASIK.

While not all Orange County LASIK surgeons use use the best LASIK technology in Orange County, Dr. Manger uses wavefront laser technology for every Orange County LASIK procedure to perform a truly custom LASIK eye surgery that delivers the clear, crisp vision you desire. Wavefront laser technology not only has the ability to affect the prescription that you’ll have after your custom LASIK procedure, but also the sharpness of your vision and how well you will be able to see fine details. The overall result of using this technology is a better visual outcome, with lower chance of certain visual side effects, than would likely be possible without it.

Femtosecond lasers are the preferred method for creating the corneal flap during the LASIK procedure. When this laser is used to create the flap, the LASIK procedure is considered “All-Laser LASIK” or “100% blade-free.” Bladeless laser eye surgery in Orange County has been one of the most groundbreaking advancements since laser vision correction was introduced in 1989.

Dr. Manger has these excimer lasers available so he can completely customize a unique treatment plan for each patient with the preferred LASIK technology in Orange County. It’s just one more reason that Saddleback Eye Center is truly one of this country’s most elite laser vision correction practices. Most LASIK surgeons use the same excimer laser to treat all patients, and take a “one-size-fits-all” approach. Not Dr. Manger.

All of Dr. Manger’s excimer lasers feature advanced eye-tracking devices that automatically follow any eye movement that occurs during the LASIK procedure. These eye trackers are so sophisticated that they can track eye movements up to 1000 times per second. This ensures that the laser beam is centered on your eye at all times during the procedure. The VISX Star 4 with Iris Registration, the Allegretto Wave Eye-Q400, and the Allegretto WaveLight EX500 also have FDA approval for treating the widest range of prescriptions compared to other lasers on the market.

See for yourself why our patients consistently say Orange County LASIK technology with Dr. Manger was one of the best decisions they ever made — schedule your free* LASIK examination today.